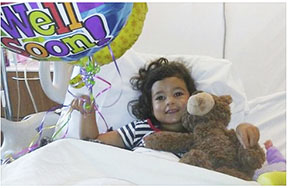 Like most of their peers, Jayda and Avery Grace Bostick were just a couple of young’ns who’d grown up in the South, and learned to enjoy country leisures.

With that deeply-ingrained southern instinct embedded in their hearts, the two sisters never had a problem getting their hands dirty.  Neither the heat, nor the bugs, nor even the most obscure paths they’d travelled around dowtown Camden recently, where they’ve been compiling their Rock Collection—ya know, like most everyone this time of year.

Point is, these girls liked to MOVE.

The sister-sister duo thought time should always be set aside to paint, hide, and hunt for rocks as part of the #Camden Rocks initiative. Jayda and Avery both make a point to sufficiently partake in whenever weather permits.
But with that agenda crossed off their list Thursday, they then resorted back to normalcy. They dove right back into what had become a normal, late-summer afternoon in the sun, and a cherished routine of playing at Grandma’s house on the evening of Thursday, July 20th.
The two sisters often found no problems staying occupied on the inviting patches of green grass, frolicking around the lawn not far from the river bay in Miller’s Ferry. Although summer was coming to a close, the season had been good to the children—However, Thursday afternoon of just a few Camden kiddos playing in the yard quickly turned into a parent’s worst nightmare…
Suddenly, a scream was heard off in the distance…
Avery Grace, the youngest of the two, was last seen outside, patrolling Grandma’s property in her “jeep”, the pink Power-Wheel version with themes and decals pertaining to every adult’s favorite animated film and song, “Frozen.”
Well, as the fates would have it, the 12V battery-powered off-road-vehicle soon ran into some terrain troubles, so Avery hopped out due to the fact that she was now literally “frozen”.
Being the adventurous type—along with being only four years of age—Avery had not reason to believe that exiting her vehicle near a thicker portion of foliage could be harmful. Most adults hardly think twice about it either.
According the Children’s Hospital in Birmingham, an average of 5 children are treated with serious snake bites per year. And the numbers are on a rise. Even large news outlets such as CNN and ABC have geared feature-expose’s on television, informing people of the sudden spike in child-bites, and with a heavier emphasis on preventing these growing disasters from happening.
But just last week, just as young Avery innocently pattered through the thicket, the hot-sharp imputations of not just one, but two very direct strikes. In back-to-back sequence, the fangs of a Copperhead impaled her exposed, four-year-old foot, not long after releasing a very toxic, potentially fatal venom into a very volatile and tiny cardiovascular system.
Knowing something was wrong, and clearly in pain, Avery was smart enough to rush back up to the living quarters where her family was there waiting to come to her aid.
Amber and Jacob realized this wasn’t any kind of ant bite or wasp sting. Within minutes, Avery’s foot started swelling and turning blue. 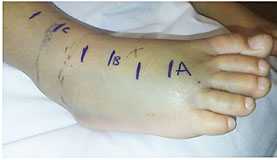 Due to the severity, uncertainty of the snake’s breed, and time being a crucial factor, Dr. Wells and the staff called Children’s Hospital in Birmingham and arranged for Life Flight to come a pick her up. Avery Grace, 4 years old, was loaded into the helicopter with only medical personnel; or, essentially strangers in blue suits with masks who wanna poke and prod at you. As if things couldn’t seem more traumatic for little Avery, she’d soon be informed that she’d be flying alone.
Little Avery Grace was taking her first helicopter ride, moments after her first snake-bite, without her parents—and according to the flight crew, without a care in the world—after just a few, justifiable tears. Avery Grace was reportedly very composed throughout the flight, whilst still being fully aware that something was wrong. She did not seem worried.
The pilots did attempt to keep Avery calm; it didn’t take much. The kind gentlemen even provided her with her own set of radio headphones, just so she could be kept up-to-date with any changes in altitude or an expected time on arrival.
“The medics called us when Avery Grace landed and was undergoing anti-venom treatment,” said Amber, Avery’s mother. “I felt helpless as a mother but I knew she was in good hands.”
While at Children’s Hospital, Avery Grace received 4 treatments of anti-venom and constant blood tests.
Little could anyone know at the time, Avery’s plight was slowly being stitched back towards normal heart rates somehow, coincidentally, in conjunction with the rapid, overnight Social Media following of her inspiring story. Amber and Jacob posted daily updates of Avery’s recovery. As each nail-biting photo of terribly swollen and purple toddler toys transitioned into smaller, more Vienna like toes—they’d eventually depict a smiling, healing face from adorable Avery. Still in a hospital bed. Still wired into machines so extraordinarily unnatural in their intended function… but by the 4th update, it was as if all knew that, at least of Avery and her good Graces, The biggest smile of all still emitted from a strange, hospital bed. Oh, and those feet and arms that were, yet still, connected securely with syringes—in this picture, those arms were raised.

Avery reached towards the photographer with a prize, one that must’ve followed her just as closely as the hundreds of Camden folks who have now shared, liked, prayed for, and gained perspective from Avery’s story. The right medicine was diagnosed. In the photo, in a Montgomery hospital, Avery clutches on to her first love. It was a rock. It was a Camden Rocks rock that was found in her hospital bed. More specifically as inscribed on the back… A WARRIOR ROCK.
What a ray of hope. What a reason to be happy for someone who just got bit by a snake. I mean, to be in a scary hospital with scary people, away from you home and friends—everything you know to be normal…but then, a gift from home. A smile.
In a perfect world, little Avery and others like her will recognize what these rock phenomenon represents, and what it’s doing to people. I hope that she holds on to that one, like the brave, brave WARRIOR she is. I hope it sticks in all of our memories that, “hey, perhaps this rock could represent something,” for Avery, maybe it was something already comforting, that spontaneously turned into her very first trials towards bravery—and a remarkably mature Faith in God (her self-proclaimed “Rock of Salvation” ) .
A day after she’d found her guardian rock that’d come all the way from Camden to see her, Avery began responding positively to the to the meds, swelling reduced significantly, and she was able to be released to come home on Saturday afternoon.
Avery followed up with Dr. White on Monday, all the swelling was gone and just discoloration was left.
A speedy recovery, and a reminder of two things—parents, these natural dangers do exist. All 50 states and Washington, D.C., reported snakebites to children between 2000 and 2013. And about one-fifth of these bites required admission to an intensive care unit, researchers found.
As for the 2nd reminder—well, thats a bit more obvious…This whole rock thing—IT EXISTS TOO. It exists further than pixels on your cell-phone screen. It even exists further than a remarkably inanimate chunk of prehistoric sediment that you painted a Ninja Turtle on, and then wrote on the back “hope it doesn’t rain today.”
You made someone smile. The rocks are so real. They are so here, and existent—they’re producing emotions and inclusion towards positivity in our daily hustle-bustles.
And I’m no doctor, but they might even prevent foot amputations due to snake venom. who knows?