Warm, Sunny skies
and a Green Day in Orange Beach 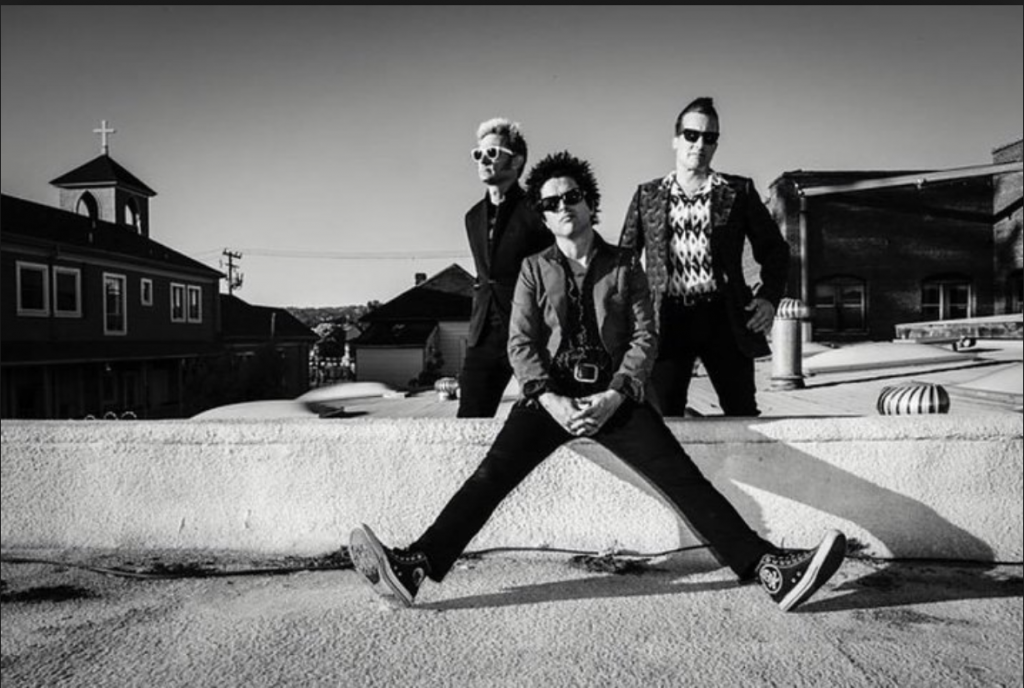 A trio of pesty punk-rockers from California’s bay area have enjoyed some pretty impressive dividends over the past 3 decades.

And especially so, considering only 1/3rd of the bunch ever received so much as a high school diploma before they’d soon become multi-millionaires, Gods among men, and the youngest Rock & Roll Hall of Famers ever to grace a moldy, bong-water-stained futon.

Call it effective marketing, but the same strategic acts of melodic rebellion have fared the boys (pardon, the men) of Green Day some adequate relevance among music’s finest critics. It wouldn’t take long before their most bubble-gummiest, most “un-punk” and “well-behaved” industry peers would transform into lifelong fans.
The age-old phrase rings true on most days, but not for Green Day; honey attracts flies better than vinegar–but for these guys, vinegar attracts more Grammy Nominations.
After 5 Grammy Awards, 3 Number #1 albums, a Broadway Musical, and arguably the most memorable Woodstock performance since the Hendrix era over 50 years ago–well, the boys must’ve eventually figured they must be doing something right.

They rose to the top by:
1) Selling 12 million piles of Dookie.
2) Releasing a song called Good Riddance (Time of Your Life) which instantly labeled the band as the ultimate Punk game-changers.  The soft (yet perfectly imperfect) plucks of an acoustic G-chord reminded us all, (1) yes, Punk Rock DOES have a soft side. And (2) we won’t be forgetting that Time of Your Life for a long time; not as long as high-schoolers are walking down the final, corded path to their future selves on Graduation Day.
The list could continue, perhaps lead-singer Billie Joe Armstrong’s tendency towards a “lude and indecent” performance–but more specifically, a tendancy to drop trow and just play naked on just about every sound stage in America.
All but maybe one…
Green Day made tickets and show times available for their highly anticipated Summer tour back in January. Shortly after, thousands of Alabamians would have to make adjustments to the normal, end-of-summer vacation to the beach we’ve all grown used to.
The charmingly obnoxious, and seemingly ageless punk-rock trio will be promoting the 3rd of an accumulated 16 studio albums to debut at #1 on the Billboard 200 charts. It’s called Revolution Radio.
For the first time ever, Green Day will be headlining a show in our home state next Wednesday, Sept. 6. It will take place at The Wharf Amphitheatre in Orange Beach, AL. And it all goes down in…6 more days.

And in case you were wonderng: Yes, you should give a damn..
It’s a stop you wouldn’t expect from most mainstream music artists. Especially those with a track-record for selling out Football Stadiums, much less a relatively small venue with a 10,000 seat capacity.
But still, The Wharf is only a few CD rotations away from Wilcox County , where the only green day’s we know happen maybe a dozen times a year inside one of a handful of banks. Even those are found sparsely tossed across mouthfuls of green farmland here. But thats okay.
Generally, the deep south isn’t known for drawing large crowds for anything too media-worthy, and i’m sure there are multiple reasons why. Our most notable, historic gatherings took place in a confederate state, and things didn’t pan out so well, according to 7th grade textbooks.

Ugly as our reputations may be, at least they sparked some seasonal interest in social justice, and inspired more than just a few Green Day songs.
Like it or not, this concert will be good for Alabama.

For bands at the top of the ranks, such as Green Day, large cities and northern metropolitan states are given precedence when establishing a tour schedule to promote a new album. Population density has a lot to do with how tickets are sold. and how much exposure can be brought to those who deserve it.
So should anyone wonder WHY the deep blue ocean shores of Alabama would all of a sudden bring an unapologetically liberalistic group of punks away from their last show in Italy, just to see sink their toes in the sands of Dixieland?
In case the gloating bias towards the “talent” informed you of nothing more than, yes, I’ve already purchased my ticket, now’s the time to transition towards the reason WHY such a stage should be set for one of our state’s most accomodating coastal accomodations.
The sum of ideas within them can be grasped with 13 simple words: Green Day is a HUGE, internationally renowned Rock & Roll Hall of Fame inductee.
They’re kind of a big deal. That’s all you need to know.
segue to the main idea, which can be summed up in words a few less:
Those Hall of Famers are playing on “our” stage, because we can give them a Hall of Fame audience.
And all that credit goes to the venue–namely, The Wharf Amphitheatre in Orange Beach—it’s rapidly grown into quite a significant place to quite a few significant musicians.
The structure is still in it’s infancy. But even since The Amphitheatre’s opening in May of 2006, some of the most ubiquitous household names and music superstars ( like Taylor Swift, Jimmy Buffett, Kid Rock, Kenny Chesney, Widespread Panic, Jason Aldean, John Mayer, Eric Church, Kings of Leon, Def Leppard and Journey) have not only looked forward to playing in front of an Alabama crowd, they insist on coming back year after year after year.
But this year will be a gamechanger, a Revoltion, if you will, for The Wharf and perhaps the state of Alabama as a whole.
Simply because…it’s Green Day, dude.
They’re more than just Rock and Roll legends; they’re the youngest group to ever be inducted into Rock & Roll’s historically exclusive Hall of Fame. They are International Superstars. They are heroes among men…
And they are also completely insane;
and kind of stupid.
and that’s made all the difference…
At the time of this writing, Revolution Radio already boasts two, number one hit singles on multiple rock, alternative, and radio and streaming charts.
Bang, Bang, the first track to hit the airwaves since the band’s temporary hiatus over 4 years ago, was overwhelmingly well-received from old and new Green Day fans alike.
From the first rapid 1/8 pulse-pounding interlude, the gut-busting Bang Bang feels like a sympathomimetic, with lyrics powerfully reminiscent of the undying outcry… nay, demand, for gun reform in the United States.
But despite the propogandic theme, the final snapping rip of Bang Bang left everyone who heard it feeling certain about ONE thing..
A thing that never should…and quite frankly still doesn’t make very much sense…
These 45 year old men who used to scramble our brains in 1994 with songs about masturbation and doing drugs… are still writing sturdy, memorable melodies and time-relevant pissings. But they’re moving just as hyperactivily as they did 30 years ago on the planks of Woodstock.

Don’t let the colorful hair and strangely organic on-stage thrustings fool you; Billie Joe, Mike, and Tre are the kind of OLD by now that an annual prostate exam is no longer a schoolbus joke, but an actual scheduled item. And they’re still able to squeeze into their teen jeans, assisting generation after generation of confused and angry 12 year olds into a world of rebellion—and they’re 100 % aware that they are the only ones who can.
They never lost sight of how it felt to be a 12 year old dumb person with no athletic ability or money to forge an identity.
Woodstock was merely a fuse which would ignite a world-wide phenomenon. In the following years, Green Day would stamp out one Platinum and two more Double Platinum albums before the perfectly timed, political rebranding of the band’s persona, American Idiot, which basically had everyone and they’re grandmother losing their freaking minds, sealed Green Day’s fate as a household name almost overnight.
Fast-forwarding through the Broadway musicals, an American Idiot movie in the works, and an overtly ambitious, 3-album compilation with 1 simultaneous release, we arrive at present day.
January 18th 2017, where yet another Revolution is playing out right before our eyes. Turn on your radio.
The 2nd single off their newest album, Still Breathing, is now entering it’s 3rd week at Number One on three Billboard charts.
Okay, so our guests from California will be doing well for themselves. Excellent. they’re not showing any signs of slowing down… Now we’ve established a theme.
Just like a Rolling Stone, or a Green Day…When an Alabama tide rolls, an Alabama tide continues to roll. Hard.