Arizona Sen. John McCain–after 30 years serving our Congress, defending our freedom as a Vietnam War prisoner,  and inspiring the Republican nation as choice for President in the 2008 elections– has passed after fighting brain cancer for more than a year.

McCain was diagnosed with brain cancer in July 2017. Just yesterday,  his family issued a statement saying,“Last summer, Senator John McCain shared with Americans the news our family already knew: he had been diagnosed with an aggressive glioblastoma, and the prognosis was serious. In the year since, John has surpassed expectations for his survival. But the progress of disease and the inexorable advance of age render their verdict.” 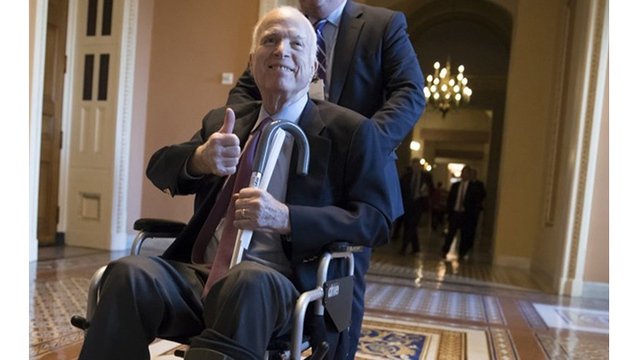 In 1967, his A4 Skyhawk was hit by a surface-to-air missile over Hanoi. McCain was captured by the North Vietnamese, who tortured and beat him for more than five years. He was in solitary confinement for several of those years.

According to the New York Times, McCain has made clear to the White House he doesn’t want Trump to attend his funeral, and would instead prefer Vice President Mike Pence at a service.

McCain is survived by his wife Cindy, seven children and five grandchildren.