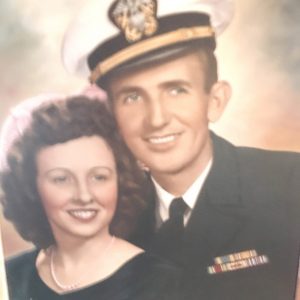 Robert B. Silvey passed away at home in Fairhope, Alabama on April 22, 2019 at the age of 100. A graveside service with military honors will be held in Cullman, Alabama on May 4, 2019 at 11am in the Cullman City Cemetery.
He was preceded in death by his parents, Joseph and Susianna (Moody) Silvey of Cullman, nine siblings, his first wife of 46 years, Helen Leonard Silvey, and his son, Robert Drew Silvey of Paris, France.
Mr. Silvey was born in Cullman, Alabama on May 18, 1918. He served in the Navy during World War II as an LCT Commander in the Pacific, the Korean War, and the Vietnam War (on the USNS Greenville Victory). He worked for Humble Oil Company as boat captain in the Gulf of Mexico out of Grand Isle, LA for 15 years before returning to the Navy in 1969 and retired from the Navy at the age of 71 in 1989.
He is survived by his daughter, Susan Silvey McIntyre, of Camden, AL; two granddaughters, Elizabeth Chesnut Crosswhite (Ken) and Grace Chesnut Bender (Jamie); six grandchildren, Bonnie Grace Crosswhite, Anna Leigh Crosswhite, Elizabeth Drew Bender, James Patton Bender, Abraham Irvin Crosswhite, and Benjamin Kale Crosswhite; his second wife, Joy Quigley Silvey and many nieces and nephews.
He loved Our Lord with all his heart, never met a stranger, loved every minute of life, and greatly loved his family. He will also be remembered as a life long University of Alabama football fan, once breaking radio silence during WWII to announce final score of an Alabama vs LSU game.
In lieu of flowers, the family would prefer memorials be made to one’s favorite charity or home church.