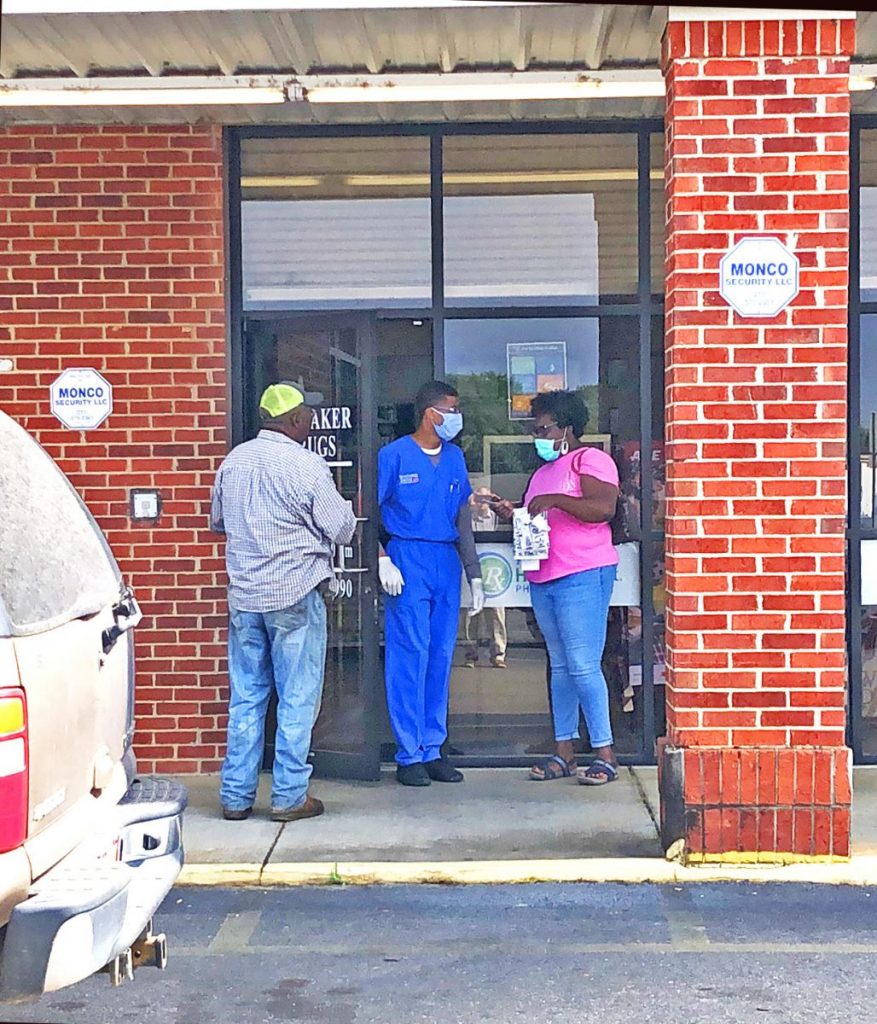 The Coronavirus hasn’t kept Whitaker Drugs from assisting patients and customers. Even behind a surgical mask, pharmacy tech Byron Grant still greets people with a smile as they fill and pick up their prescriptions curbside. Whitaker Drugs has also been utilizing their drive-thru window to provide services. -Photo by Michael Baker

As new cases begin to surge around the state, with 999 confirmed infected and 17 dead from the virus, Wilcox County still finds itself seemingly unaffected with only 3 cases confirmed.

Realistically, this low number is due to the fact that not many Wilcox citizens have actually been tested for COVID-19.

As of last Wednesday, less than 10 people have been tested at our local sites. The extent of just how infectious and widespread Coronavirus can be in our area is still unknown due to the limited testing denominator, the lack of rapid testing in rural areas, and the nature of the disease itself.

The incubation period for Coronavirus is somewhere between 1 and 14 days. That is, the time window between when the virus is contracted to when symptoms begin to show. It can spread through water droplets in the air and also lie dormant on non-living surfaces for several hours to several days. Those infected may not know they’re infected or show any symptoms until they’ve unknowingly exposed an incalculable number other people.

Also unknown is where the virus has already been and who it has affected in Wilcox County. HIPAA restrictions help to conceal certain bits of information to protect the patient’s confidentiality. According to the ADPH, only the county from which the patient resides can be made privy to the public while remaining in compliance with these laws. Often times, a region of the county or the place of work of the infected person can be determined by process of elimination; however, only when the testing location of the sick patient can be determined.

Dr. Kidd announced Tuesday morning that one of his patients has tested positive for the virus. “I have received confirmation that one of my patients has Covid-19.” he said, “The patient was tested on 3/19/2020. The results came back today, 3/31/2019, 12 days later.” “Despite what the news is telling us,” Kidd continued, “the testing at least for where we live, takes too long to get the results back and are unavailable to healthcare facilities. I have 5 Rural Health Clinics I’m responsible for. We had 50 tests at the beginning of this because we had viral tests already in the office. We have not been able to get any more tests. Being limited to appropriately test severely impairs our ability to limit exposure to those who are infected because we cannot identify them.”

By Tuesday afternoon, news broke of an employee at Camden Nursing Facility who had tested positive for the virus. The positive employee last set foot on CNF grounds on March 18th when she left work claiming she wasn’t feeling well. She is reportedly at UAB hospital undergoing treatment. There is speculation throughout the community that the coronavirus presence at CNF is more widespread than is being reported. We are still awaiting an official statement from CNF’s administration on what preventative measures are being taken for the safety of employees and residents alike.

2 patients have been tested at Dr. Blackmon’s office. Both came back negative. Neither J. Paul Jones Hospital nor the Rural Health Clinic in Pine Hill have received word of a positive test.

It should be noted that any metric of “positive” Coronavirus in Wilcox County could have been a patient tested at an off-site location, at a hospital in Montgomery, for example. From what we know of the positive tests so far, the patients’ home addresses seem to be concentrated in the county seat of Camden.

Local physicians have been offering “drive-up” testing to expedite the process and keep customers safe. The procedure can be done from the parking lot via a nasal swab. The procedure is very sterile, quick, and convenient for patients. Most will be checked in, tested, and sent off within 15 minutes. Pharmacies such as Whitaker Drugs have also been mitigating services through the shutdown by providing drive-thru and curbside services.

The Wilcox Health Department will provide testing by appointment tomorrow, Thursday, April 2nd from 10 a.m. to 2 p.m.  Patients who either have a doctor’s recommendation or who meet the screening criteria will be offered a test. Appointments can be made by calling the health department at (334) 682-4515 or by visiting your primary health physician.

The Camden Nursing Facility has restricted visitation, but they’re allowing some visitors to speak with residents through the front glass doors, as well as online. “We now have an Ipad for our residents to use to video chat with their family!” CNF announced on their Facebook page, “If you would like to FaceTime with your loved one, send your info to cnf.ipad@icloud.com.

Gov. Ivey issued a revised health order that went into effect Saturday at 5 p.m. This new order called for more closures throughout the state, mostly for non-essential businesses such as retail outlets, bars, and movie theaters. It also states all non-work-related gatherings of 10 people or more or non-work-related gatherings that can’t maintain a six-foot distance between people are prohibited. On the federal level, President Trump has extended social distancing guidelines until the end of April. The President predicts the coronavirus cases in the U.S. will likely peak “around Easter”.