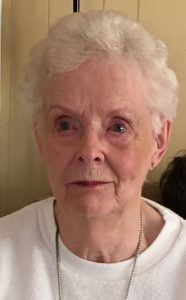 Mrs. Betty Jayne Browder Griffin, a resident of Ozark, Alabama, died Thursday, April 28, 2022, at her home. She was 88 years old.
Funeral services for Mrs. Griffin were held graveside 11:00 A.M. Sunday, May 1, 2022, in Pond Bethel Methodist Church Cemetery in Baker Hill, Alabama. Interment followed, Holman Funeral Home and Cremations of Ozark directing.
Mrs. Griffin was born January 28, 1934 in Troy, Alabama to the late James Browder and Berta Partin Browder. She devoted her life to God and family. She was an active member of the Ozark Presbyterian Church and never missed a night reading her Bible before bedtime. The most important things in her life were faith, family and cherished friends. In addition to her parents, she was preceded in death by her husband of 65 years, Earl D. Griffin and five siblings.
She is survived by her children, Mike (Michele) Griffin, Mark (Dana) Griffin, Susan (John) Hilboldt, Matthew (Joanne) Griffin; grandchildren, Nolen Griffin, Ryan Griffin, Jeremy Griffin, Kristina Griffin, Connor Griffin and several nieces and nephews.
In lieu of flowers memorials may be made in her memory to Pond Bethel Methodist Church Cemetery or to the charity of your choice.
Condolences may be expressed at www.HolmanFuneralHome.com