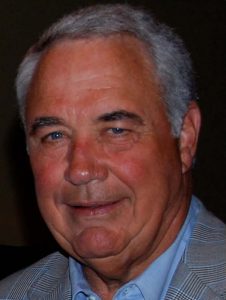 Lathrop Winchester Smith, Jr.
April 4, 1942 – October 27, 2022
As a man who will be remembered for his love for people and the ability to make them laugh, Lathrop Winchester Smith, Jr, age 80, of Birmingham, Alabama went to be with his Lord and Savior on October 27, 2022. He was born in Birmingham on April 4, 1942 to Jane Sevier Smith and Lathrop Winchester Smith. Lathrop was predeceased by his parents and sister Jane Sevier Smith. He is survived by this wife of 52 years, Garland Cook Smith; his son Lathrop Winchester Smith III (Brannon); his daughter Lindsay Smith Puckett (Jason); his granddaughter Dorothy Ann Smith, his grandson Lathrop Winchester Smith IV; his sister-in-law Jean Lindsay Cook; and his first-cousins who were immediate family to him, Mary Ruth Caldwell (Charles), Landers Sevier IV (Paula), Kirby Sevier (Becky), Mary Stewart Sevier and Lilla Tynes Sevier, James Arthur Smith, and William Orr Smith.
Born in Birmingham, he attended Crestline Elementary School, the Darlington School in Rome, GA, Vanderbilt University and the University of West Alabama, where he received a B.S. in Business Management in 1965. During his summers as a boy, he attended St. John’s Camp in Wisconsin, where he was awarded the best camper award for a number of years.
Lathrop began and ended his career at Industrial Supplies, Inc. (ISI), a regional distributor of bearings and power transmission equipment. Under his leadership as President from 1971 to 2003, the team at ISI grew the business significantly and opened branches in Alabama, Florida and Mississippi. In 1987, Lathrop served as President of the International Bearing Specialists Asso- ciation.
As a lifelong member of Independent Presbyterian Church, he served as a Deacon, an Elder and a Trustee for the IPC Foundation. He was a member of Mountain Brook Club, The Club, the Red- stone Club and the Beaux Arts Krewe. At Mountain Brook Club, he served several times on the Board of Governors and President. At The Club, he served on the Board of Governors since 2006.
He served as a board member or officer of various organizations, including Amsouth Bank’s Birmingham Regional Board, Lake- shore Hospital Foundation, Darlington School, the Birmingham Chapter of the American Heart Association and the Baptist Health Foundation. Due to his challenges with dyslexia, Lathrop was most recently involved with Spring Valley School.
Lathrop especially enjoyed playing golf with the Marauders, hunting with the Smiling Mallards, playing gin with his afternoon card group, traveling the world with various groups of friends and spending time with his family and friends in Birmingham and Camden, AL. His dedication to his family was profound. His family and friends will remember him for his quick wit, humorous say- ings and his loving thoughtfulness. People were near and dear to his heart, as he never met a stranger and always lit up a room. He always remembered to call friends, family and work colleagues on their birthdays.
The family expresses gratitude to his many friends and caregivers. Gabe Newman, Lois Macon, Nancy Harris, David Harris, Ron Har- ris, Lynn Howard, Sharon Forrest and Tina Jones all gave Lathrop such loving care during his final challenge with Parkinson’s. In lieu of flowers, please send memorials to Spring Valley School, www. springvalleyschool.org, the Baptist Health Foundation, www.baptisthealthfoundation.com or your charity of choice.
A service was held on Wednesday, November 2, 2022, at 3:00 p.m. at Independent Presbyterian Church, 3100 Highland Avenue 35205, immediately followed by a celebration of life from 4:00-6:00 p.m. at Mountain Brook Club at 19 Beechwood Road, 35213. A private family burial will take place at Elmwood Cemetery.