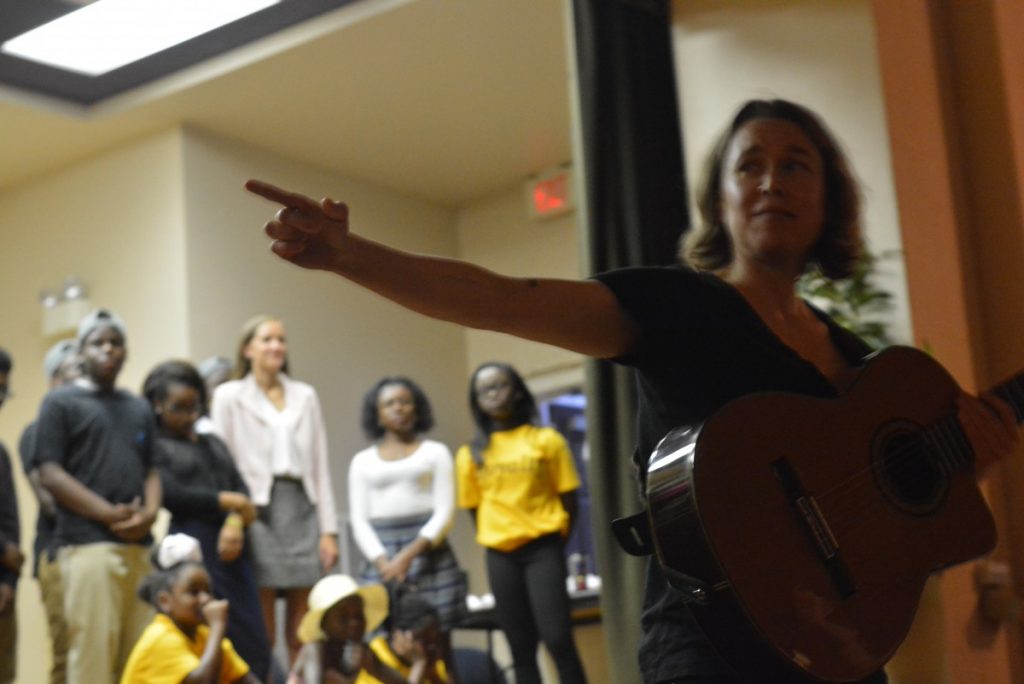 Their closing statement might have sounded a lot more like a question, but just as our welcomed vistor’s hands would clasp the ropes backstage in Camden’s School of Arts and Technology for one last time, a group of amazingly talented individuals were already making their intentions 100% clear.

They’d thrown us a bone. To the backdrop of a perfectly synced stomp-clap “question”, those kids had in fact made a statement. We’d be asking a lot of questions by the end of it all, but nobody, parents, politicians, commissioners, educators and students alike, nobody would’ve ever anticipated those would be questions we’d be asking OURSELVES….long after the curtains were drawn. 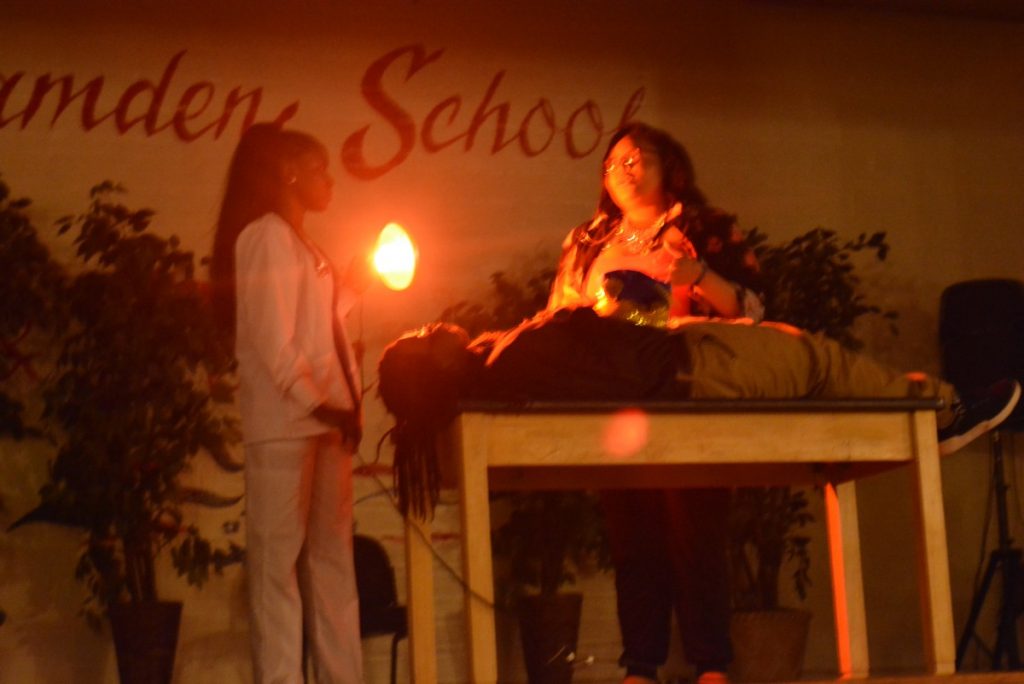 A group of volunteer-Broadway actors arrived at BAMA Kids last Sunday, with no script or lines; only a strong desire and high expectation. The results were beyond expectation, even for those who work with BAMA Kids each day. 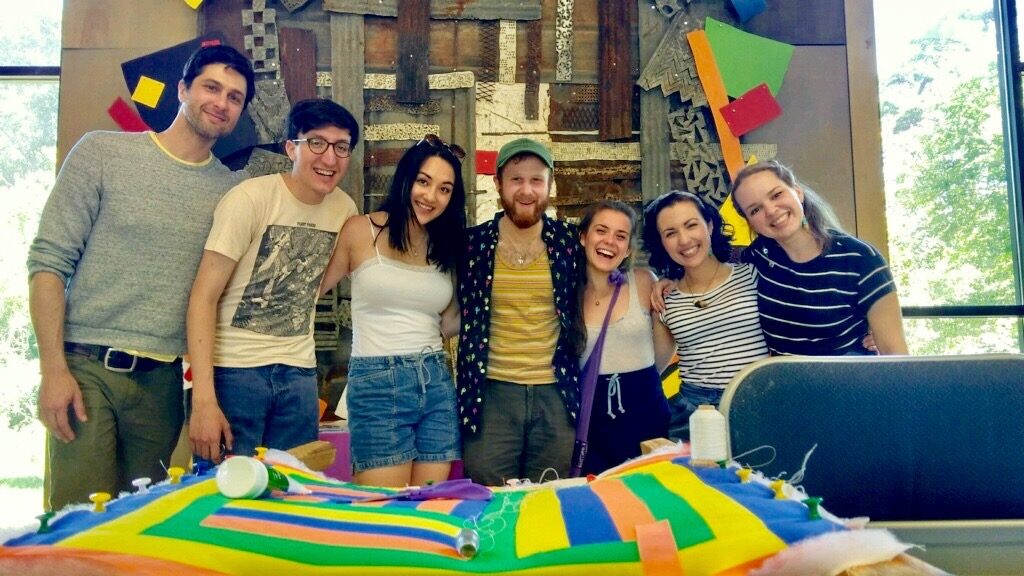 The BAMA Kids actors came up with a theme, allowed characters to evolve from their imagination and made them come alive on stage. After several suggestions, they voted on the name , “Kingdom of Chaos”.

The lights went out at the play’s conclusion, and the packed auditorium was for the first time–silent.

In that closing moment, and although we thought we were wiped out and exhausted after casting centuries worth of laughter, applause, and thoughtful projection towards the worthy talent, we were suddenly able to muster up at least enough energy to rise to our feet, and wipe away tears. They were tears of joy, proud admiration, and most importantly -hope, only this time, that hope would last.

The evidence to back it up was right in front of us. Evidence of an infinite potential in the hearts, minds, and voices of Wilcox County’s future was at last undeniable, and shining much brighter than just a few stage lights. It’s in the eyes of our children. Seems almost criminal to think that potential hadnt been there all along.

That’s why we can all thank God for people like Kate Schutt, Sheryl Threadgill, and… A bunch of white kids from New York?

You read that correctly… “Zara Aina”. Share life. It was the message and motto that this wonderful group of performers brought to Camden, Alabama from hundreds of miles away…

“The entire show came all from the kids’ imaginations. And it was all improvised.” says Justin Cimiro, Education Director for Zara Aina based in NYC, “There was never any written script. Our process works like this. We voted on a theme: detective/crime story, then we had the kids imagine characters from that kind of story, then we interviewed the characters about themselves and the kids improvised their responses, then we put characters together into scenes, then we put scenes together into a logical storyline.”

They did all of it in seven days.

Zara Aina also happens to be the namesake the Broadway crew. They’ve done stuff like this before, at times traveling even further to Madagascar. Their goal: to deliver that hope, motivation, love, direction, knowledge, power, music, choreography, and truth… To those who need it most … Wouldn’t it be nice. If our nation, if our own County, acted a little more like those folks. The talent is already here.

And to the BAMA Kids…Hey, we can hear you now. 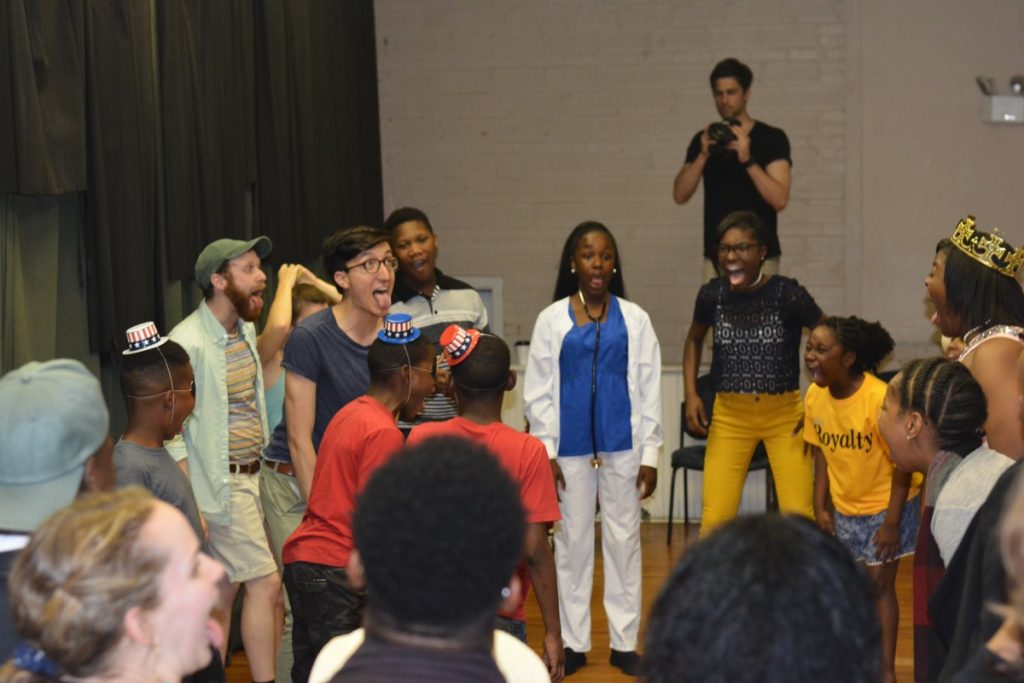