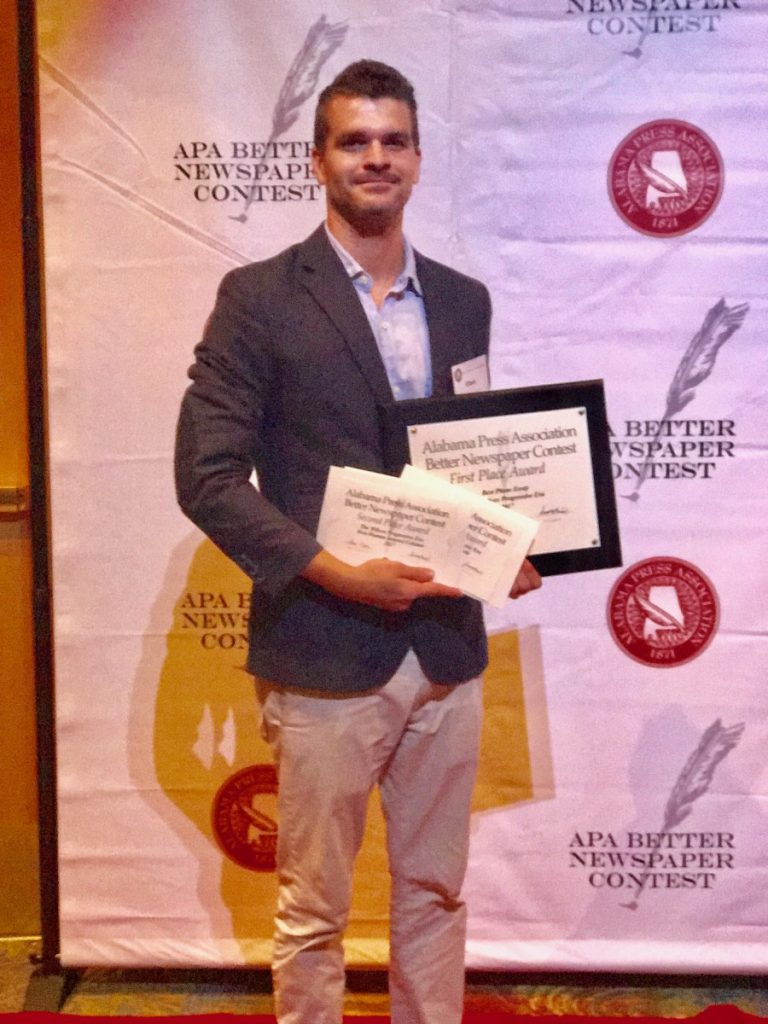 Ethan Van Sice, 26, Editor of ‘The Wilcox Progressive Era’ newspaper in Camden, raked in a total of four (4) awards over the weekend during Alabama’s APA Summer Press Convention in Orange Beach.
Publisher Glenda Curl, of Camden, accompanied Van Sice during the 3-day event, along with his girlfriend, Hannah Feltus, of Fairhope.
Of the 4 honors received this year, Van Sice was granted 1st Prize in the “Best Photo Essay” Category. He also received two Second Prize certificates in the “Best Human Interest Column” category, and “Best Editorial Column or Commentary” category. A stunning spot-news photo of last year’s fiery destruction of Shell Creek Manor would seal a 3rd Place nod in the “Best Feature Photo” category.
Ethan says he’s “humbled to be recognized by such a highly-esteemed and respected group (APA).”
“Awards are always nice,” he says, “but it’s always better when they’re for things you actually enjoy doing.”
This year’s haul marks a grand total of 6 awards Van Sice has received since he became an official staff-member in 2014. He now holds the title of “Editor in Chief” at the newspaper.
“I owe a debt of gratitude to a lot of people,” Ethan says, “particularly staff members Debbie Gamble and LeAnn Stallings for putting up with my antics.”
The biggest thanks of all, Ethan says, goes out to his grandmother and boss-lady, Glenda Curl, for “making it seem as if the possibilities are endless for me…even in newspapering!”