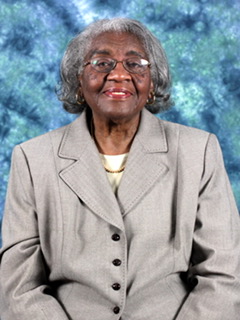 Ruby Lenora Battle Carter, 87, passed on May 29, 2017. She was born in Wilcox County – Miller’s Ferry, AL.
She accepted Jesus Christ at an early age, was baptized at Miller’s Ferry United Presbyterian Church and remained a faithful and loyal servant throughout her lifetime.
Ruby graduated high school from Wilcox County Training School, received a Bachelor’s Degree from Alabama State University, and a Master’s Degree in Education from Tennessee State University. She taught high school at Lower Peach Tree in Wilcox County and Hudson High School in Selma, AL.
She was an active participant in voter registration and the Civil Rights Movement.
After moving to Columbus, OH in 1967, she worked for the City Recreation Department and taught in the Public School System. Ruby had a passion for education and loved and inspired children to be the best that they could be. She enjoyed coaching various sports teams, and was an avid sports fan. She was a kind and loving spirit who always reached out to church, family, and friends. While in Columbus, she joined Bethany Presbyterian Church serving as the Clerk of Session for several years.
After retiring and moving to Yorktown, VA to be near her daughter and son-in-law, she joined Carver Memorial Presbyterian Church and later Denbigh United Presbyterian Church, both in Newport News, VA. She enjoyed participating in Sunday School, Women’s Circles, and Clothing and Prayer Ministries. Ruby was a former member of the National Council of Negro Women.
Ruby was preceded in death by her parents Reverend Sam Battle and Bettie Jefferson Battle; three brothers: Freeman, Washington, and John (Ruth); three sisters: Agnes Campbell (Willie James), Myrtlene Lawson (Charles), and Ann Matthews (John). She leaves to cherish her memories her daughter and son-in-law Carol and Steve Washington (Newport News); granddaughter Dr. Melanie Kinchen and great grandson Julian Kinchen (Dallas, TX); stepdaughter Starla Carter (Columbus, OH) and a host of nephews and nieces and other loving relatives and friends.
Viewing/Visitation with the family will take place on June 9th, 6:00-7:00 p.m. at W. J. Smith & Son Funeral Home.
A celebration of Ruby’s life will be held on June, 10th, 1:00 p.m. at Denbigh United Presbyterian Church. Interment will immediately follow at Peninsula Memorial Park. In lieu of flowers, donations in memory of Ruby Carter may be made to the Alzheimer’s Association.