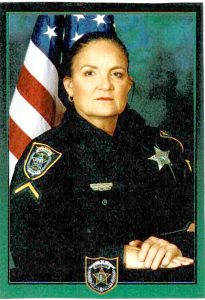 Dorothy Pearson Davenport, known to her family and friends as Dina, age 64, of Pensacola, Florida, passed away on March 13, 2019, in her home, surrounded by her family and friends.
Dina was born in Fulton, Alabama, January 19, 1955, to loving parents Rial Hobson and Carrie Merle Pearson. Dina grew up in Camden, Alabama, the ninth of twelve children. She graduated from Wilcox County High School in Camden, Alabama in 1972 as Valedictorian of her class.
After graduation Dina moved to Columbia, South Carolina. Dina worked in various jobs during the ten years she lived in South Carolina and only a short time after moving to Columbia she met her husband, William (Bill) Davenport.
Dina moved to Orlando, Florida where she spent the next thirty-three years. Dina worked for UPS for a short time and then found her forever “dream” employment, working for Orange County Sheritrs Department. Dina retired with twenty-three years of service as a Master Deputy Sheriff. Job well done.Diana then moved to Pensacola, Florida where she spent the last years of her life.
Diana was recognized for her service during hurricane Katrina Relief Efforts by the Orange County Sheriff’s Department. Diana also worked as an off duty security officer at Sea World and for church services on Sunday mornings.
Dina was a member of the Northland Church in Orlando Florida and the Point Baptist Church in Pensacola Florida.
Preceded in death by her husband, William (Bill) Davenport, her mother, Carrie Merle Pearson, her father, Rial Hobson Pearson, her sister, Ann Roberts Walker.
Survived by brothers, Willie G Pearson (Elaine) Bryant Pearson (Faye) James Pearson (Mary Ann) all of Camden, Alabama, Harold Pearson (Roxie) Atmore, Alabama, Coleman Pearson, Terry Joe Pearson (Wendy), Camden, Alabama, William ( Winky) Pearson (Cindy), Theodore, Alabama, sisters, Jeanette Hall, Northport, Alabama, Cynthia Hussey (Patrick), Cottondale, Alabama, Bernice Evans (Parker), Perkinston, Mississippi, as well as many nieces and nephews and great nieces and nephews.
A memorial serive will be held in her hometown of Camden, Alabama at Bible Baptist on March 30, 2019 at 2:00 p.m. Visitation will be from 1:00 until 2:00 p.m.
Dina was an avid animal lover. She leaves behind her dog, Zoey, and her cat, Isis, who she dearly loved very much. She loved going to the movies with her friends and eating out, she loved people in general.
In lieu of flowers please donate to your local Humane Society or the American Cancer Society in her memory.