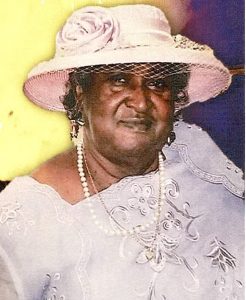 Services for Ruthetta “Colston” Wiggins, affectionately known as Rooster & Bull, was held on Saturday, August 10, 2019 at 11:00 a.m. at Rockwest Missionary Baptist Church, County Road 19, Camden, AL with Pastor William McNeil, officiating and Mrs. Debra Moye, Compere Expeditor. Visitation was held prior to service from 10:00 a.m. – 11:00 a.m.
Numbers 15:20.. Born among the children
Ruthetta “Colston” Wiggins was the second of nine children born to the late Mr. Herbert Sr. and Mrs. Rosie Lee Colston on February 24, 1938 in Wilcox County, Alabama.
Ephesians 2:15.. and the household of God
Ruthetta was baptized, converted and confessed her life to Christ at an early age by joining Rock West Baptist Church. She worked in Long Island, NY for a short period before moving to Mobile, Alabama and the back to Camden, Alabama.
Judges3:1.. with all the family
Ruthetta was preceded in death by her husband, James Wiggins, Jr. (1006), Parents Herbert Colston, Sr. (1959), Rosie Lee Colston (2017). One son, Donald Lynn Wiggins (2013); one brother, Herbert Colston, Jr. (2006); three sisters: Marie Smith (2016), Helen Wheeler (1997), and Margaret McElroy (2013); brothers-in-law: Roy Smith (2006), Albert Wheeler (2009), Ron Hobbs (2017), Theo Hall, St. (2017).
Five Children: Patricia Colston of Paterson, NJ; Mitchell (Deborah) Colston of Woodbridge, VA; Carrie Colston of Camden, AL; Wendell (Sherry) Wiggins of Camden, AL and Melinda (Glen) Nelson of Bloomfield, CT. Five Siblings: Johnny (Ann) Colston of Morristown, NJ; Liza Colston of Somerville, MA; Annie Hobbs of Laurel, MD; Frankie Hall of Hoover, AL and Eugene (Sue) Colston of Camden, AL. One Loving Aunt: Liza Wooten of Mobile, AL.
Ruthetta Colston Wiggins leaves to cherish her loving memories: grandchildren and great grandchildren: LaTangelia Frye, Georgia, Al-Tarik, Za-mier, Kenneth, Jr., Tanisha Frye, Ny’mie, Zahir, Kaseum, Tarik, Kavellia Dy-Nasti-Rene’e, Kaadin, Audrey Frye, Tysaun, Giniya, Reilly Glaskall, Shaun Nelson, Larry Messiah, Miche’le Shay Nelson, Justice Powe, Donald “Pooh Cat”, Kenya “MA”, DeAnthony “Popsicle”, Nakeisha “Nella”, Jarrod Colston, Charles, Colston, Brianna Colston, Morgan, Colston, Michael and Felicia Wiggins AKA “Heavy”, Mia Faith and Glenda Nelson.
A loving sit on the porch, talking on phone “what’s for dinner? Sharing sister-in-law, Hattie Colston; a special aunt, Ethel Mae Colston; a loving kind caregiver, Lizzie Love, special cousins: Edward Hill, Ralph Wheeler, Mary Cochran, Carrie Wheeler and Clem Dickerson; special friend Estell Thompson and a host nieces, nephews, cousins, other relatives and friends.
Pall Bearers (grandsons & nephews) Jarodd Colston, Reilly Glaskall, Gregory Wheeler, Larry Nelson, Keon Wheeler, Kevin Woods, Michael Wiggins, Zedrick Colston, Charles Colston, Alfonso Dallas, Jr. and Nicholas Dallas.
Floral Attendants (granddaughters and nieces) Michele Nelson, Kenaya Powe, Latoya Weatherly, Glenda Nelson, Akeshia Wiggins, Brianna Colston, Takenya Wheeler, Brianna Williams, and Morgan Colston.
A Tribute to Our Mom: You’re a strong woman. A phenomenal woman the nickname that was given to you were given shows how strong people think you are as we all know the “Rooster” is the king of the barnyard. The “Bull” is the king of the pasture. One of your sisters told me once, she relied on your muscle and strength to gift her battles. You raised six children on your own. A true testament to your strength. You taught us the value of an education saying you didn’t get it, but your children will. You were our own personal designed and tailor, making some of our clothes. I remember the lavender pleated skirt you made for Tricia. Making quilts for us was one of your pass time favorite. I remember you getting up making a fire in the fireplace, making breakfast, then waking us up for school. I can recall you watching us from the bed as we go dressed. When we returned home from school, dinner would be on the stove warm with different dishes for your picky children to eat. You were our cook, maid, psychiatrists. When Mitchell and I would fight you would yell “stop all that arguing like catss and dogs”. We would then start a new argument about who was the cat and who was the dog. Mom, you loved to listen to blues and gospel. Wrestling was your favorite think to watch on TV. She made sure everything was done in the house because nothing was going to interrupt her wrestling. After Thanksgiving she put her Santa Claus and snowman in the yard but wouldn’t turn them on because they “used up too much “juice”. Our mom loved Christmas. Christmas is also the time she got to bake her famous custard pies and give them as gifts. She decorated her entries house “nothing matched”. It was because of your strength, determination, honesty, respect, secret caring and loving ways that we are so blessed to have you as our Mom! Another flower was planted in the Garden and we call her “Mom”.
Ruthetta’s earthly remains may lay in Powell Cemetery. Christian Memorial Funeral Home was in charge of arrangements.