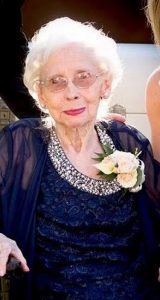 Funeral services for Ethel Dunnam McGraw will be held at 11:00 am Thursday, November 14, 2019 at the Camden Baptist Church in Camden, Alabama with Reverend Chris Wells and Reverend Steve Dyess officiating. Dunklin and Daniels Funeral Home Directing. Burial will follow at Camden City Cemetery.

Ethel was born on February 5, 1932, the middle child of the late Edgar Alvin Dunnam and Wenonah Pritchett Dunnam. She graduated from Wilcox County High School in 1950 and married the love of her life, Henry Frank McGraw Sr. on June 14, 1950 after he returned home from the U.S. Army.

After marriage she began working with her husband in Frank’s Grocery and raising her two sons. Ethel was an active member of Camden Baptist Church, avid sports fan, strong advocate of her boys while they were playing sports and well known throughout the country as “Queen” of The Bridge Club.

Ethel was preceded in death by her husband, Frank McGraw on June 13, 1979 and both parents, Joseph Alvin and Wenonah Dunnam, brother, Edgar Alvin (Fabris), sister, Nona Dunnam Liddell (Bobby) and many many beloved friends.

Online condolences can be made at https://www.dunklinanddanielsfh.com/