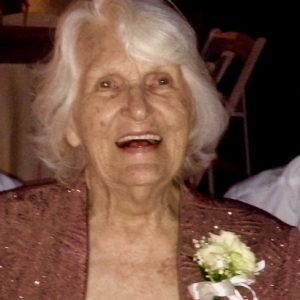 he Reaves Hill at the home of her grandparents, Harriet Frances Kennedy Reaves and William McDaniel Reaves. Despite being raised during the Great Depression, she only spoke fondly of her childhood memories and escapades on the farm. She loves her siblings and cousins dearly and told many stories of their glorious adventures together.
She attended school in Coy, Alabama during her elementary years where she said she had more fun than learning! She graduated from Camden High School where she excelled as a student and cheerleader.
After high school Frances married Cassie Lee Gaines, a WWII veteran. They settled in the Bells Landing community where they devoted their lives to raising children and crops and spoiling their grandchildren for sixty years. Their hard work and dedication left a legacy with their family farm now in its third generation of operation.
Frances was a bright and spirited woman who knew how to work hard and laugh loud. She enjoyed a good book, a lively debate, and was passionate about politics. She had a strong sense of self and although almost blind at the time of her death, Frances still lived a mostly independent life on her own terms.
A graveside service was held at Reaves Chapel Cemetery on Sunday January 17, 2021 at 2:00 pm. Brother Reid Nettles officiated with Dunklin and Daniels Funeral Home Directing. In the interest of safety, the family asks that guest wear masks and socially distance.
She was a member of Gullet’s Bluff Baptist Church where she served faithfully for many years and taught her children to love the Lord. Her grandsons served as pallbearers.
In lieu of flowers, please make memorial gifts to Reaves Chapel Cemetery Fund c/o Joyce Reaves, 141 County Rd. 6 Camden, AL 36726.