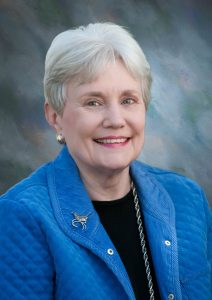 Jane Beach Jones Carmichael was born on April 14, 1941, in Kansas City, Missouri, to Paul Rex Beach and Dorothy Jane Shawhan. She grew up in western Kansas and in Kansas City, Kansas graduating from Wyandotte High School in 1959. She attended Baker University in Baldwin, Kansas, and graduated with a degree in Elementary Education from the University of Missouri at Kansas City in 1963. She was married to James Coleman Jones from 1961 until his untimely death in 1981. In 1994, she married Dr. Daniel Erskine Carmichael of Birmingham, AL.
Jane was a member of Mountain Brook Presbyterian Church from 1968 until her death. She was an Elder, Sunday School teacher and superintendent, Chair of the Christian Education and Missions Committees, and was Clerk of Session. She also served on several Presbytery committees and task forces. Planning, cooking, and serving Wednesday night dinners usually yielded new recipes she was willing to share with family and friends. She planned and participated in multiple mission trips, played handbells, and sang in the choir. She taught school for one year following her college graduation and later worked in advertising and marketing for ten years. Jane was a lifelong reader and enjoyed gardening and identifying wildflowers. The happiest birds and other critters lived in her backyard. She sang all the time and loved to laugh.
Jane is survived by her beloved husband of 27 years, Dr. Daniel Erskine Carmichael. They had many happy years and adventures together. They traveled in the US and abroad to visit children, grandchildren, friends as well as seeing the sites. Before smart phones, they traveled with Oreo’s, nuts, maps, a dictionary, and a compact encyclopedia. Known as Mom, Jane, Janie and Ma, she is also survived by her brother, Paul Rex (Fran) Beach of Walnut Creek, CA, her three daughters, Jennifer (Mark) Jones Thompson of Marietta, GA, Amy (Philippe) Jones Troukens of Maisons-Laffitte, France, Mary Susan Jones of Birmingham and her stepchildren, Catherine (Chris) Carter of Birmingham, and Gilbert (Jennifer) Carmichael of Arlington, VA. Her seven beloved grandchildren who knew her fondly as “Ma” are Coleman and Katie Thompson, Jean-Maurice and Lucie Troukens, Daniel and Britton Carter, and Lee Carmichael.
A Memorial Service was held on Friday, January 28th at 11:00 am at Mountain Brook Presbyterian Church, 3405 Brookwood Road, Birmingham, AL 35223.
The graveside service was held the following day at 1:30pm on Saturday, January 29th at Mt. Moriah Fellowship Baptist Church in Mt. Moriah, AL.
In lieu of flowers, donations may be made to Mountain Brook Presbyterian Church, Jane Jones Carmichael Memorial Fund.
Online condolences can be made at www.dunklinfh.com