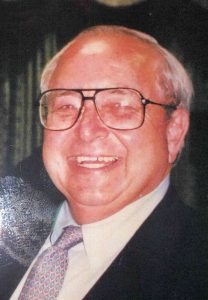 Wyeth Holt Speir, Jr., “Chuck”, age 88, a resident of Daphne, Alabama, passed away Thursday, January 19, 2023, after a long illness.
He is survived by his wife, Lena Winters Speir, of Daphne; his children, Jennifer Lokey (Bob), Holt Speir, John Speir (Stacy) and Bill Speir (Susan); 6 grandchildren, Jenny Bailey (Andrew), Christine Speir, Will Speir, Lena Cole Speir, Coleman Speir and Holtie Speir; 2 great grandchildren, Win Bailey and Annie Bailey; 3 siblings, Phillip Speir (Kay), Carolyn Anders and Harold Speir (Anna); 14 nieces and nephews; and many other relatives and friends.
Chuck Speir was born in Greenville, Alabama, and grew up in Furman, Alabama. He attended Moore Academy in Pineapple, Alabama, for elementary and high school, graduating in 1952. He attended Auburn University and graduated in 1958 with a degree in Agricultural Education and in 1961 received his Master’s Degree from Auburn in Agricultural Vocational Education. He paused his undergraduate studies at Auburn in 1954 to enlist in the United States Army. He was stationed in Germany for two years then returned to Auburn to complete his studies. After receiving his undergraduate degree, he taught vocational agriculture in Carlowville, Alabama, while continuing his academic studies. He subsequently served as a County Agent in Dallas County, Alabama, for 6 years. In 1967, he joined Helena Chemical Company as a manager in agricultural chemical operations. His advancement in his career with Helena Chemical Company led him and his family to live in many locations throughout the United States, and he achieved the position of National Marketing Manager. In 1977, he returned to Selma, Alabama, to create his own agricultural chemical supply business in partnership with his brother and concurrently engaged in farming crops including cotton, soybeans and wheat. In 1980, his company was purchased by ConAgra Foods, and he served as president of that company until his retirement in 1994. His distinguished career in agricultural education and business was well known throughout the country. He helped launch countless numbers of associates into careers in agriculture. He was a charter life member of the Auburn University Agricultural Alumni Association and was inducted as a member into the Alabama Agriculture Hall of Honor in 2009. He was a member of Alpha Gamma Rho fraternity at Auburn University and maintained lifelong friendships in that organization.
He and his wife, Lena, have been active members of First Baptist Church, Fairhope, since their relocation to the area in 1992.
Chuck was totally blind for 25 years due to retinitis pigmentosa. He never complained about his blindness and remained an optimist at heart. He was a loving family man. He worked hard throughout his life to build success and shared that success with others in many ways.
Funeral services were held Monday, January 23, 2023 at First Baptist Church, Fairhope, at 2:00 pm. Visitation will begin at 12:00pm until time of service.
Interment followed at Memory Gardens of Fairhope.
In lieu of flowers, memorial contributions may be made to:  Juvenile Diabetes Research Foundation, PO Box 37920, Boone, IA 50037-0920 – or – Foundation Fighting Blindness, 7168 Columbia Gateway Drive, Suite 100, Columbia, MD 21046.
Arrangements by: Wolfe-Bayview Funeral Homes & Crematory, Inc., 19698 Greeno Rd., Fairhope, AL 36532, (251) 990-7775, www.wolfefuneralhomes.com.