It’s virtually impossible to visit the City of Camden without at least noticing Henry’s Red & White. Over the past 60 odd years, the iconic grocery store has become synonymous with the town. Even those who’ve never had the pleasure of stepping inside would be considered “gifted” to have overlooked the large, brick structure nestled on the Southside artery of downtown. With dozens of vibrant, handprinted signs advertising weekly deals on fresh heads of cabbage, 68-cent sweet potatoes, and 5 for 5 deals on the most sought after packaged meats, the building’s exterior seems to shout welcoming calls back to the neighbors who have learned they can trust the words they’re reading.

Today, the signs are bittersweet. Closeout sale prices and mark-downs call attention to great deals, but also a great deal of grief. Everything must go. The fresh cut strips, the sparkling stalks of veggies, everything but perhaps the memories. Henry McIntosh has been stocking the shelves here for just over half a century.

He began as a butcher in the meat department, eventually taking over as manager in 1962. But over the years, Mr. Henry has become more than just a grocer to the people of Camden; He’s more of a “Mr. Rogers” type of guy. Always smiling, always happy to see you, and always leaving you feeling less like a customer and more like a beloved member of his own family. Mr. Henry has sustained a comfortable living with his grocery store, but he’ll tell you the most rewarding aspect of his job has been the people he’s had the pleasure of serving.

My impromptu interview with Mr. Henry about his life and times as Camden’s favorite grocer, although admittedly “intimidating”, he’d say with a chuckle, was still welcomed for what it was worth in the middle of one of his last days on the job. We were interrupted several times by people who’d stop in just to see him. Word travels fast in a place like Camden. Likewise, so do condolences and tearful farewells.

Mr. Henry is a humble soul. He displayed an admirable difficulty commenting on his own influence to our town, choosing instead to focus on the effect his customers have had on his own life. A customer overhears our conversation, “Aren’t you gonna be bored? Or lonesome?”, she asks. “Well yes, that’s sort of a fear I have,” Mr. Henry answered. “If my wife was still here, I’d already be closed. I’d be spending time with her.” Mr. Henry lost his wife to cancer back in 2010. “This has sort of been a coping mechanism for me,” he says, “closing this store has been the 2nd worst thing I’ve ever had to do, but it’s like Max Lucado says ‘when you go through trials and tribulations, God is at His best.’ That’s the way it’s been for me. He’s pulled me through.”

Henry’s Red & White is sort of an anomaly in terms of resilience. Not too many small town markets have been able to survive with the continuing surge of larger franchises like Piggly Wiggly and Wal Mart. I asked Mr. Henry his opinion on exactly how Henry’s Red & White was able to maintain business. He answered confidently in one word, “friendliness.”

And a friend, along with the freshest deals and sweetest dishes, is exactly what we’ve all received from Mr. Henry. And a good friendship, even in the Great Beyond, is something that has an unlimited shelf-life. Mr. Henry’s legacy is a living reminder that a good friend is quality merchandise. One that, if cared for and looked after, should never ever expire. 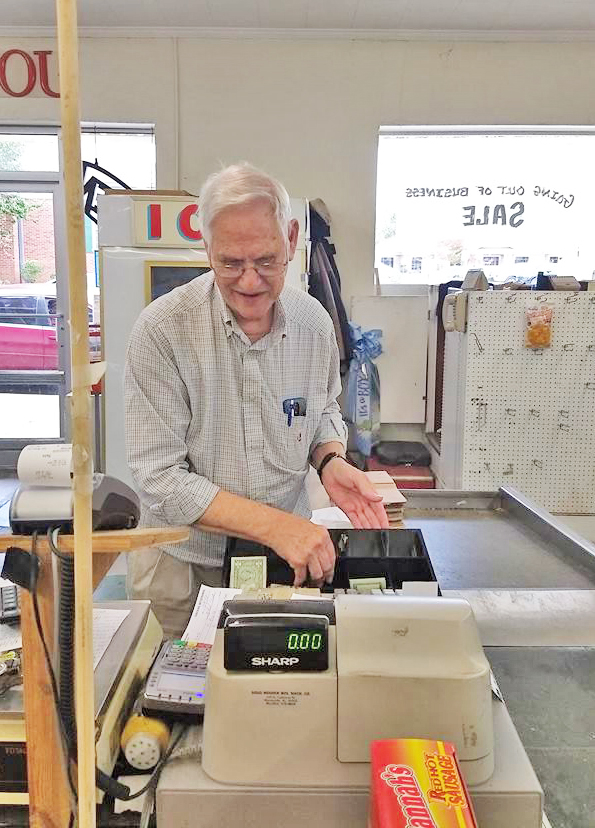